Andre the Giant is an online slot game designed and provided by NextGen Gaming. The game has 5 reels and 25 paylines and is based on the talented and ambitious French wrestler with the stage name Andre the Giant, who competed in WWF tournaments between 1973 and 1992. He also became famous thanks to his role starring in the cult classic 1987 film The Princess Bride.

Andre the Giant has been designed with the theme of wrestling in mind, and the game in set in a wrestling wring backdrop while the slot reels hang on the ropes. The game has a simple but powerful design overall, and added details like the bright spotlights and background audience make for immersive game graphics.

The reel symbols in Andre the Giant are all related in some way to wrestling, and feature items like wrestling event tickets, wrestling boots, a foam finger glove, a folding chair, hot dogs, a blue wrestling mask, a golden champion’s belt, a wrestler wearing a red mask and a referee. 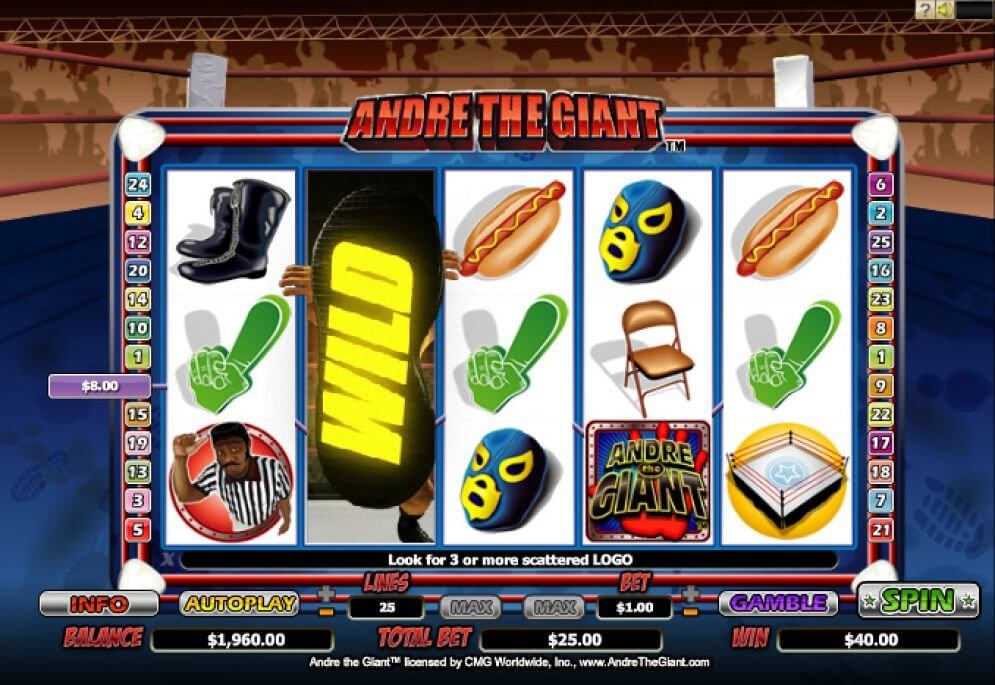 The wild symbol in Andre the Giant is an image of Andre himself. The wild symbol can substitute all other symbols except for the scatter symbol. This wild is also an expanding wild, and appears on reels 2 and 4 only, and Andre stomps his foot and shakes the game expressively as his wild symbol expands to cover the entire reel and create more winning combinations.

The game’s scatter symbol is the ‘Andre the Giant’ logo. Dropping 3 or more of these scatter symbols on the reels will trigger the Battle Bout Bonus feature, which awards players with 10 free spins. During these free spins, players can also collect Special Attack icons which appear randomly in reel 5. These Special Attack icons can then be used in the wrestling match to defeat a virtual opponent, and include Bear Hug, Chop, Choke and Head Butt moves.

During the wrestling match, players must select the various moves they have collected during the free spins round to attack and defeat their game opponent. Players can choose one of 3 opponents, namely Flame Bro, Jimmy Iron Legs and Voltage van Zandt. Each attack will result in players winning 1x their free spins total win, and 3 attacks will trigger Andre the Giant’s finishing move, which will defeat the opponent and reward players with an additional bonus prize.

Andre the Giant online slot games also offer a Gamble feature. Players can use this feature to wager their last win to win double or quadruple the value of that wager. Once presented with a mystery card, players can predict the colour of the card, either red or black, to double their win, or choose the suit of the hidden card, either diamonds, clubs, spades or hearts, to quadruple it.