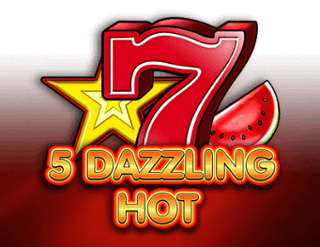 5 Dazzling Hot is a five reel, three row slot game from Euro Games Technology, or EGT, available for both free and real-money play at selected casinos online. It is one of the titles linked to other EGT titles via the Jackpot Cards Bonus Feature. Above the reels, the four card suits are arranged in increasing order of value: clubs, diamonds, hearts and spades. Alongside each suit is a progressive total, which increases constantly according to the number of players playing titles in the Jackpot Cards network.

The Jackpot Cards bonus can be triggered at random after any 5 Dazzling Hot spin. If it activates, the player is faced with a new screen featuring 12 cards, face-down. The player must turn over cards until they have uncovered three of the same suit, at which point that becomes the suit jackpot the player wins, capped at the last progressive amount reached when the player’s final card was flipped.

5 Dazzling Hot is another slots title themed around the original mechanical fruit machines, so it uses the same limited variety of classic symbols. The game has only eight symbols in total, including the Scatter, which automatically gives players better odds on scoring matches of two, three or more on the 5 pay lines.

While 5 Dazzling Hot uses the same fruits, sevens and stars of the traditional machines, these have been beautifully updated in realistic 3-D graphics, steeped in intense colours. A number of other developers have fruit-machine themed slots, but most are accompanied by the jangling electro beeps and trills familiar from land-based slots rooms. 5 Dazzling Hot, in contrast, has a very low-key soundtrack; the clicking of the reels is interrupted by a sting of marimba or sleigh bells to celebrate wins. Really big prizes are heralded by fireworks sound effects and cascading coins. 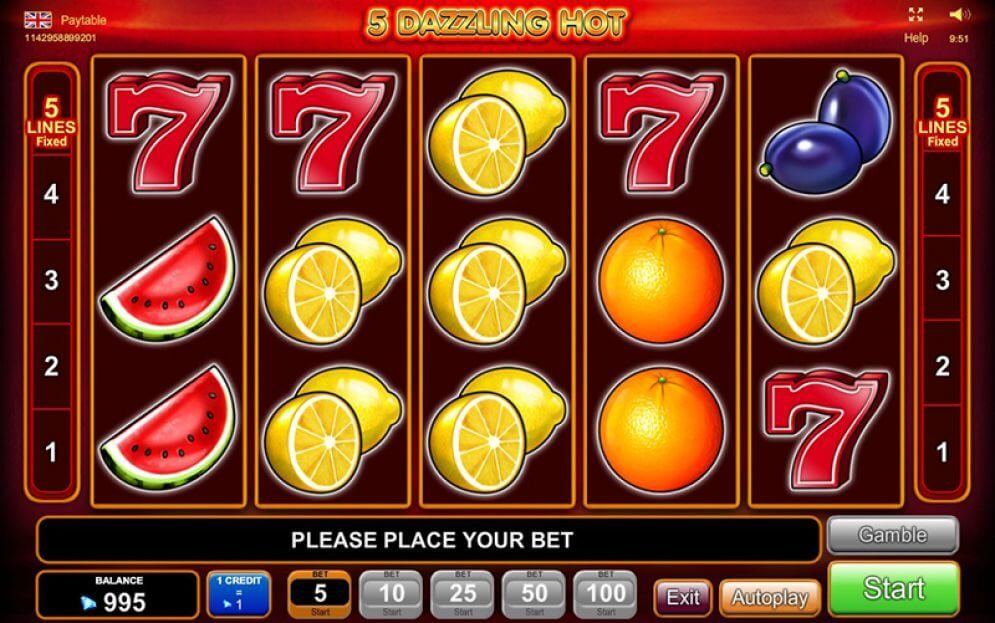 The 5 Dazzling Hot reels are encased in a simple orange frame against a background of flame red. Game controls are easily visible at the base of the screen. The 5 pay lines are fixed, and instead of messing around with bets per line, the game offers players five different bets per spin: 5, 10, 25, 50 or 100 coins. Pay table prize amounts adjust according to the player’s bet level, and are given as a total coin amount. The prizes given here as examples are based on a top bet of 100 coins per spin.

Of the fruit symbols, the double cherries icon traditionally wins a prize for matching just two symbols, and in 5 Dazzling Hot this prize is 100 coins. All other symbols require three matches or better to win, starting at 400 coins for three cherries, oranges, lemons or olives, up to 10,000 coins for five bunches of grapes or watermelons, and ending with a top prize of 100, 000 coins for five Lucky 7s.

There is no Wild in 5 Dazzling Hot, and the only special symbol is the Scatter: another traditional fruit-machine icon, the star. There is no bonus game to trigger, but three or more Scatters in any position on the 5 pay lines win a set prize. Three, four or five Scatters win 200, 1,000 or 5,000 coins. 5 Dazzling Hot also has a Gamble feature, for those who like to risk wins in the hope of doubling them.