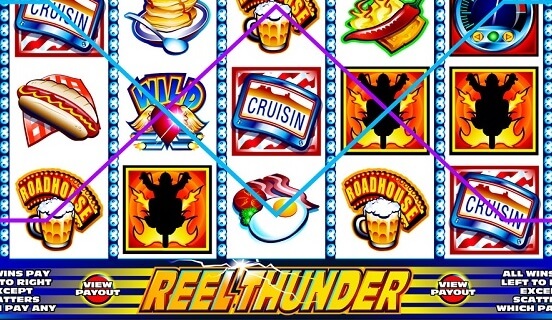 Internet gaming software developer, Microgaming has revved up the simple five-reel format with an American-biker-style theme to create its Reel Thunder online slot. Players of this 9-payline slot join the head road hog and his gang astride their steel steeds on a chilled-out Sunday run complete with cold beer, hot dogs, pancakes, and other roadhouse fare.

The only bonus feature offered by Reel Thunder is the free spins bonus; it does not include multipliers, bonus games, or other such extras. Instead, the appeal of Reel Thunder lies predominantly in its 96.95% average return to player, large 10 000 coin jackpot and the fact that it is also available for mobile interfaces like tablets and smartphones.

Like wagering options in several Canadian casino games at https://canadiancasinosites.org/, the coin values available in Reel Thunder range from 0.25 to 10.00 and the max bet is set at 1 coin only per payline. This means that the highest possible wager per spin is valued at 900 – i.e. 90 coins at a value of 10.00 each. This makes Reel Thunder a relatively high-stakes game best suited to players with a bit more experience and larger bankrolls who don’t mind the extra risk for a possibly large win.

In Reel Thunder, the wild symbol takes the form of a winged heart crossed by exhaust pipes and can appear on Reels 2, 3 and 4. The wild can be used to substitute any symbol except the scatter to complete winning combinations. When this happens, the winged heart becomes animated and the sound of a revving engine can be heard, followed by the opening guitar riff of a familiar 80s rock tune.

The scatter symbol in Reel Thunder is a motorbike engine with the word “Scatter” beneath it. Although scatters have a relatively low value compared to other symbols – five scatters in a spin pay out just 50 coins – they are much more accessible because they don’t have to appear on active paylines to pay out as long as there are at least two of them.

Because it was such a fan favourite, Reel Thunder was one of the first 40 games that Microgaming included in its mobile portfolio using the HTML5 format. What this means is that any kinks that may have existed in the original mobile version have long since been ironed out to make for a much smoother Reel Thunder gaming experience.