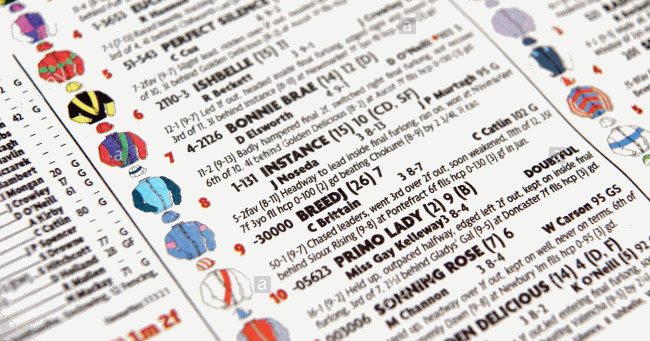 Betting on the horses is a thrill for experienced punters and novices alike, but it helps to learn some basic terms if you’re new to the pastime, to avoid confusion. In general, for instance, it is normal to talk about an athlete being “in form”, but if you’re talking about a horse, it’s better to talk about the animal’s “condition”.

That’s because “form” has a specific meaning in horse racing; one that is relevant to your betting choices. You’ll find each horse’s form inside the race card – which, confusingly, is sometimes called a racing form.

A race card gives all the information for each race at any specific meeting. It includes the names, distance and type of every race on the day, any restrictions on entry, and also lists the horses and jockeys racing. It will include owners and trainers and the colours of the jockeys’ silks, and any weights carried in handicapped races.

It will also include each horse’s racing record, called the horse’s form. A printed booklet can hold only so much info, which is where internet betting scores over going to the track or the tote. At online and mobile betting sites, you can see a horse’s complete form over its entire career; on a physical race card, generally only a horse’s last six races are listed.

Where To Find The Form Guide

Some horse racing cultures, especially in the US, refer to the form as the form guide. Either way, a horse’s recent form guide is generally depicted on the left-hand side of the race card between the horse’s number, gate draw and silk colours, and its name.

Online race cards will often have a “full form” click-through under the six-digit recent form, which will take you to the horse’s full record over its entire racing career, and also allow you to check each previous race’s distance, weather conditions and so on, comparing them to current conditions when you bet.

But a horse’s most recent six races can be a potent indicator of its chances anyway, so it’s a good idea to know how to read the recent form, for when you’re betting in a hurry.

How To Read Recent Form

Each of the 6 digits in a recent form code refers to a previous race, arranged chronologically earliest to latest from left to right. The numbers 1-9 show where a horse finished in each race, with a 0 indicating it ran tenth or worse.

A hyphen represents a change from one season to another, while a forward slash indicates a break of a season or longer. The codes F, U, D or P tell you a horse fell, unseated its jockey, was disqualified or got pulled up in a race, and a V means the race was voided.

Codes like C, D, CD or BF under the horse’s name tell you, respectively, that it has won at this course before, at this distance before, at this specific course and distance, or that it was the favourite in its last race and lost.